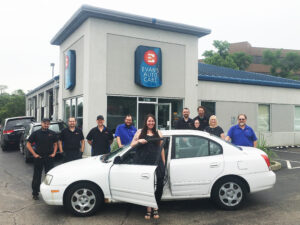 Evan’s Auto Care donated a Hyundai Elantra to Heather Potter, a Sycamore teacher in need, on the last day of school.

During the month of May, Evan’s Auto Care collected over one hundred nominations for people in need of a vehicle to enhance their lives. Evan’s Auto Care had decided to donate one of its loaner vehicles to a person who needed it, and as the nominations started coming in, it was clear that the Blue Ash community was behind one particular person.

Heather Potter, a teacher’s aide at Greene Intermediate School, received about a third of the nominations. The criteria wasn’t based on volume, with Evan’s Auto Care employees doing a vote on the person they deemed most deserving. Based on all of the comments from the nominators, the staff knew that Potter was their unanimous vote. Potter works with special needs students and dedicates her time to them after hours and whenever she can. She is a mother of two daughters, and she said that they were so thrilled with this new opportunity, as Potter’s Honda Pilot had been stalling regularly in traffic. 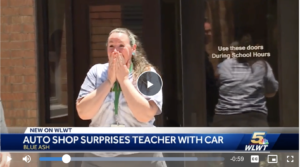 Watch WLWT’s coverage of the surprise donation on the last day of school!

Evan’s Auto Care surprised Potter on the last day of school on Friday, June 3, 2022 with news crews on site at Greene Intermediate School to deliver her the news that she was chosen for the car donation. Evan’s officially transferred ownership of the Elantra to Potter on Friday, June 10.

The employees at Evan’s had noticed that the Elantra had been sitting for a significant amount of time and only needed several repairs, so they decided to fix it up in order to donate it to a person in need, which included a brand new windshield generously donated by Mel’s Auto Glass.

“It was quite clear that Heather had huge support from the Sycamore community and everyone said the same things about her positivity and dedication to her work and family,” said Darren Weigl, Director of Marketing at Evan’s.

As a business, Evan’s Auto Care does everything it can do to help its customers while staying profitable for over 55+ years in the same Blue Ash location that was once a BP gas station. They have seen many cases where a much needed repair or a reliable replacement vehicle was not an option at the time due to lack of finances for an unexpected, costly repair.

Evan’s Auto Care is a family-owned, independent auto repair facility in Blue Ash at 9190 Plainfield Rd. Family owned and operated since 1964, we are committed to our community and invest our time outside of our garage to give back in many ways. Evan’s Auto Care is eagerly involved in multiple sponsorships, generous donations, and we always enjoy doing volunteer work to give back to our local neighbors and community.

Mel’s Auto Glass is a family-owned, independent auto glass replacement and windshield repair company servicing the Greater Cincinnati, Dayton, and Northern Kentucky communities since 1987. We are proud to be one of the largest family-owned auto glass businesses in the U.S. and realize our customers deserve the credit for our success. The owners of Mel’s Auto Glass, Lisa and Mel, are active in the business and continually invest in tools and processes required to retain our position as the Tri-State area’s auto glass leader.

Fill out my online form.